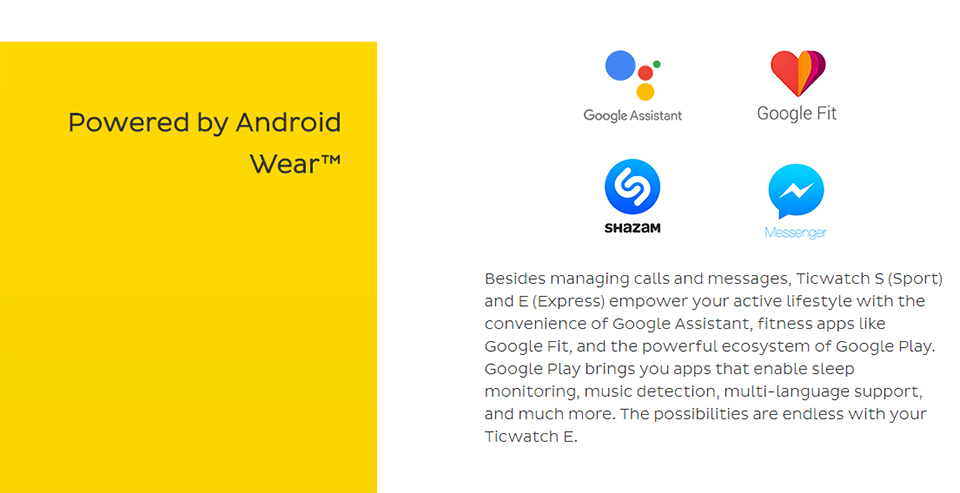 Besides managing calls and messages, Ticwatch S (Sport) and E (Express) empower your active lifestyle with
the convenience of Google Assistant, fitness apps like Google Fit, and the powerful ecosystem of Google Play.
Google Play brings you apps that enable sleep monitoring, music detection, multi-language support,
and much more. The possibilities are endless with your Ticwatch E 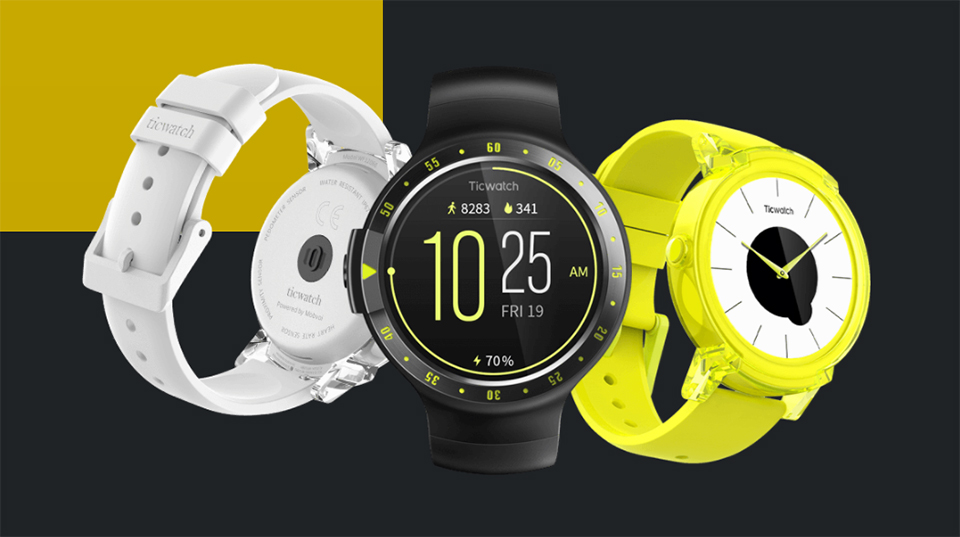 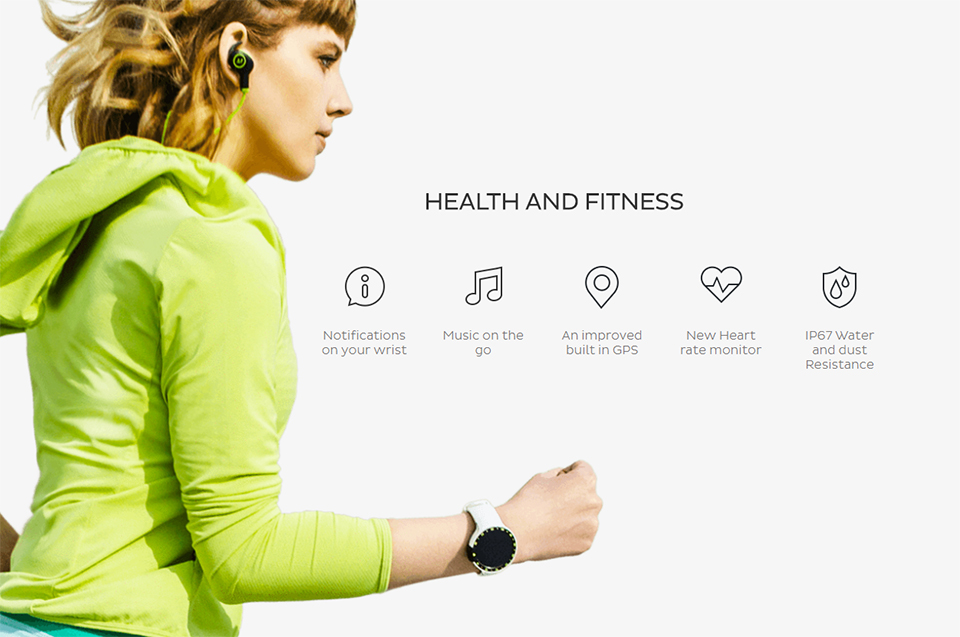 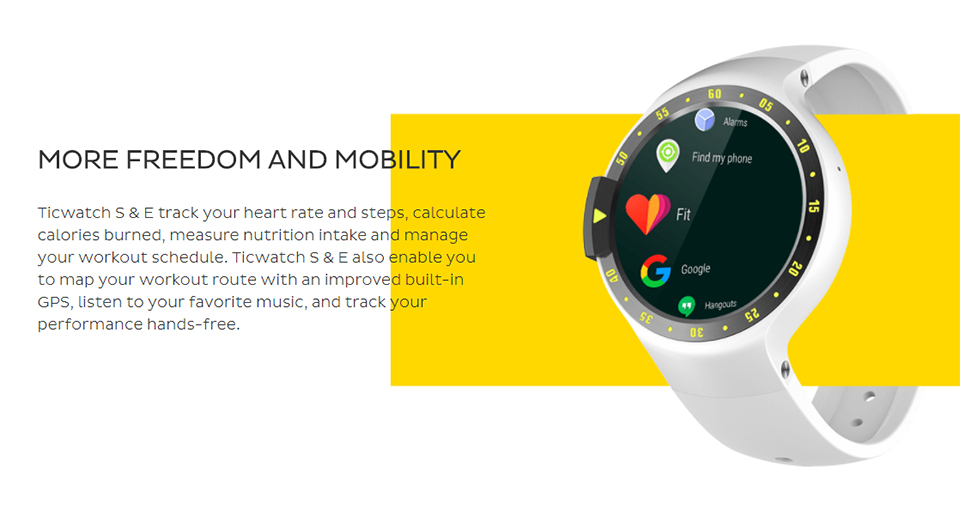 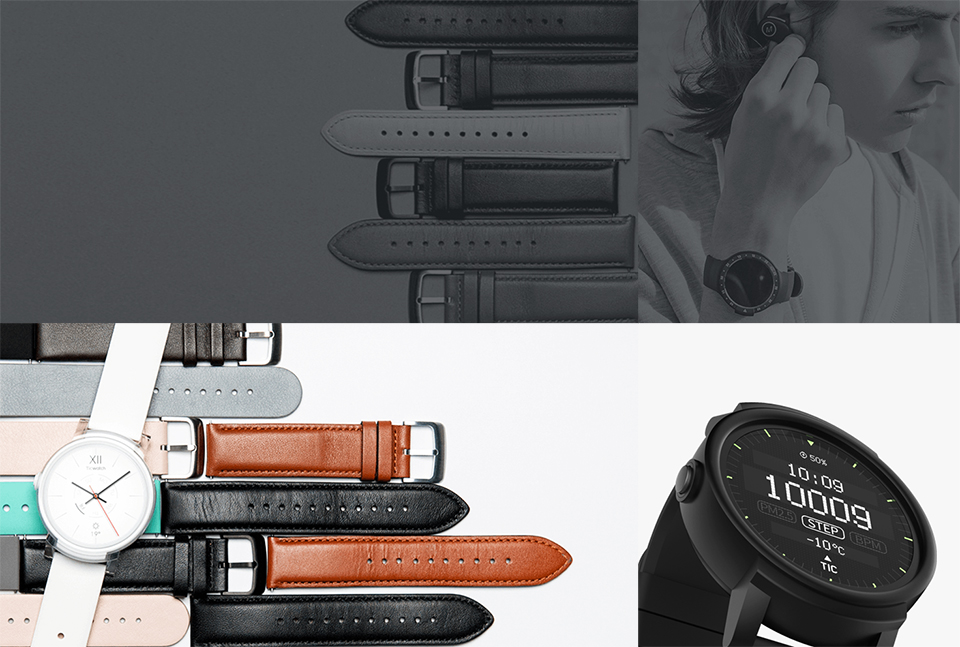 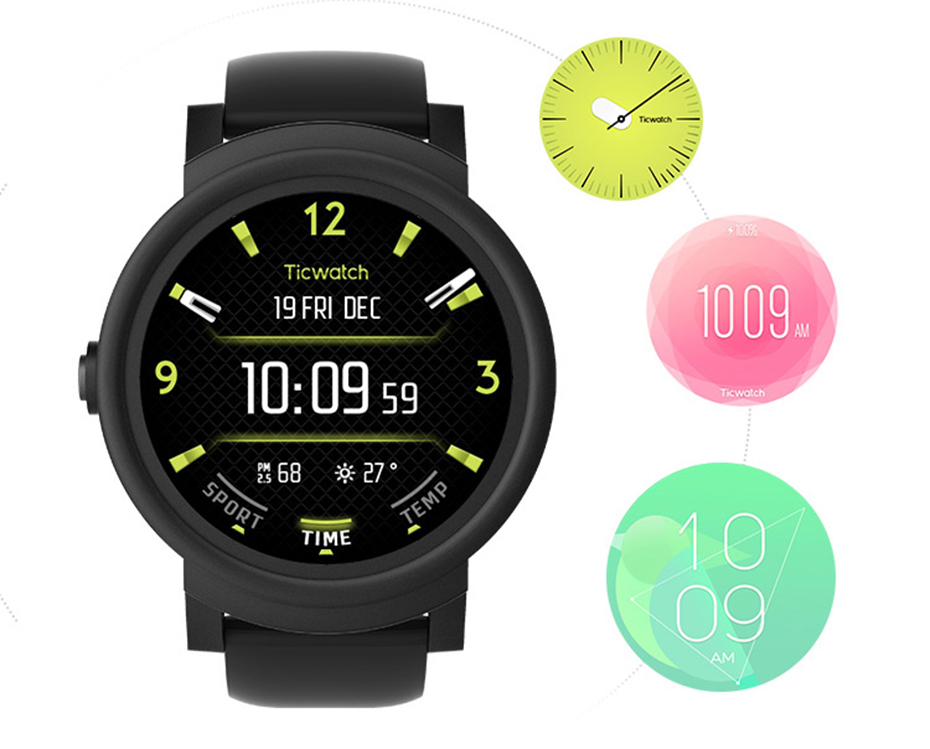 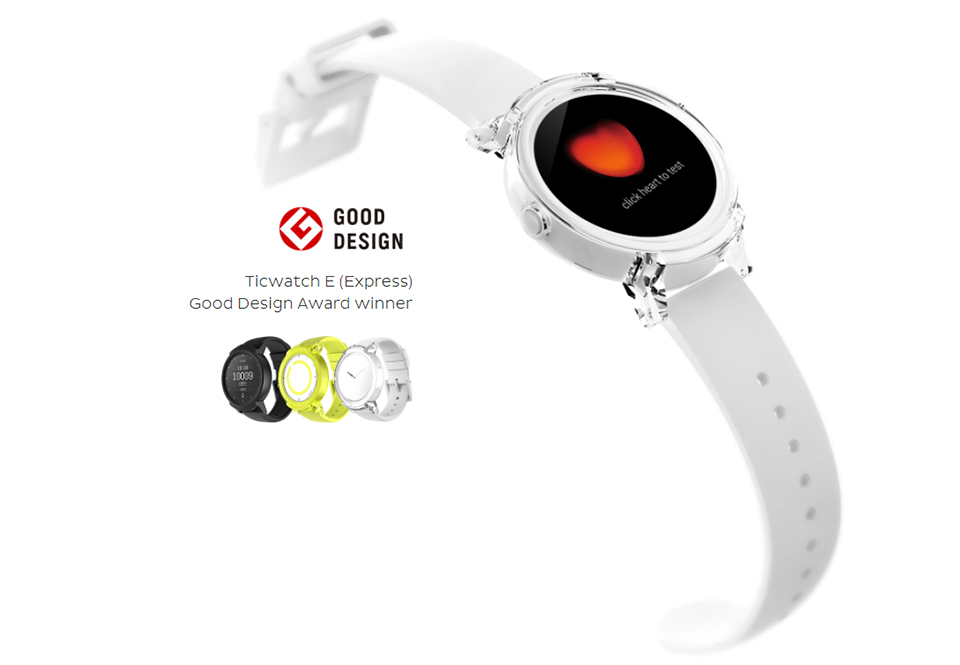 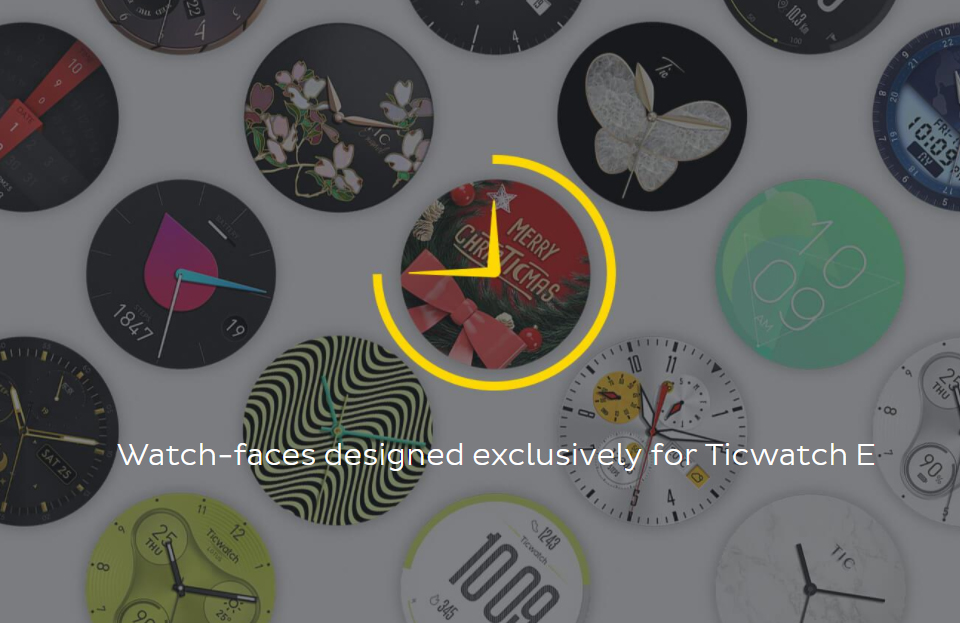 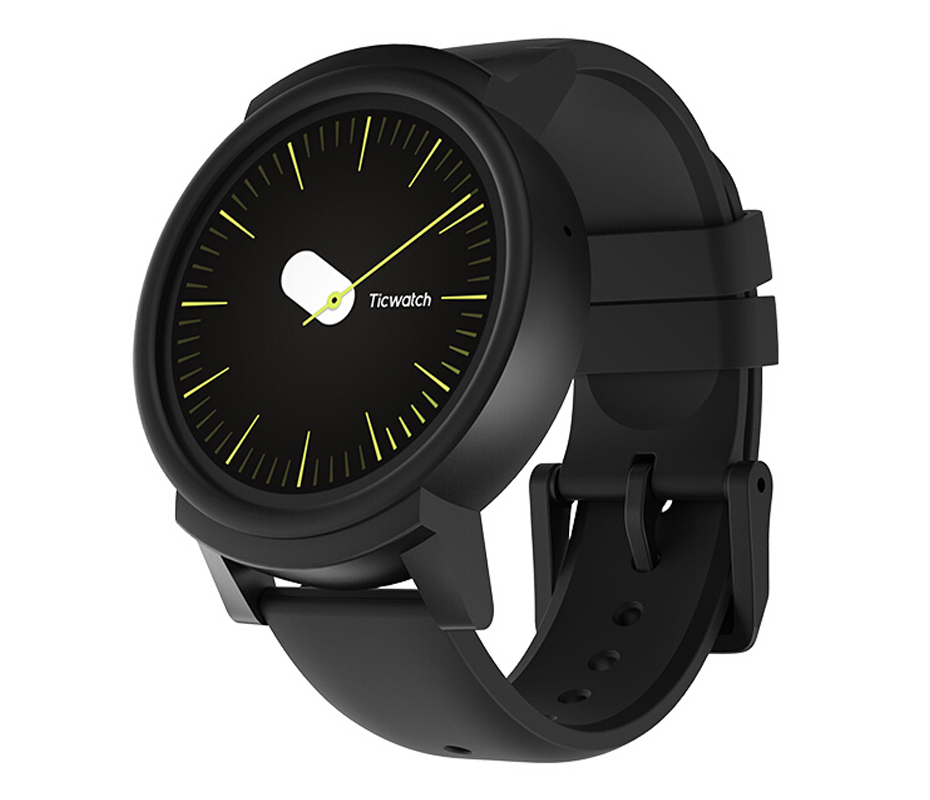 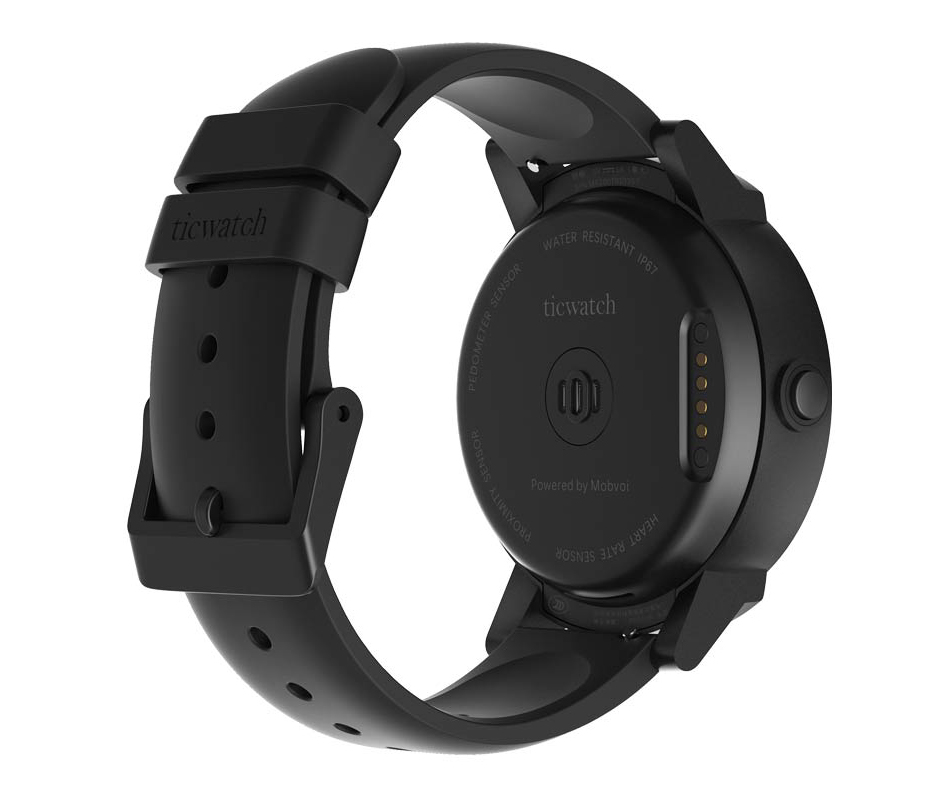 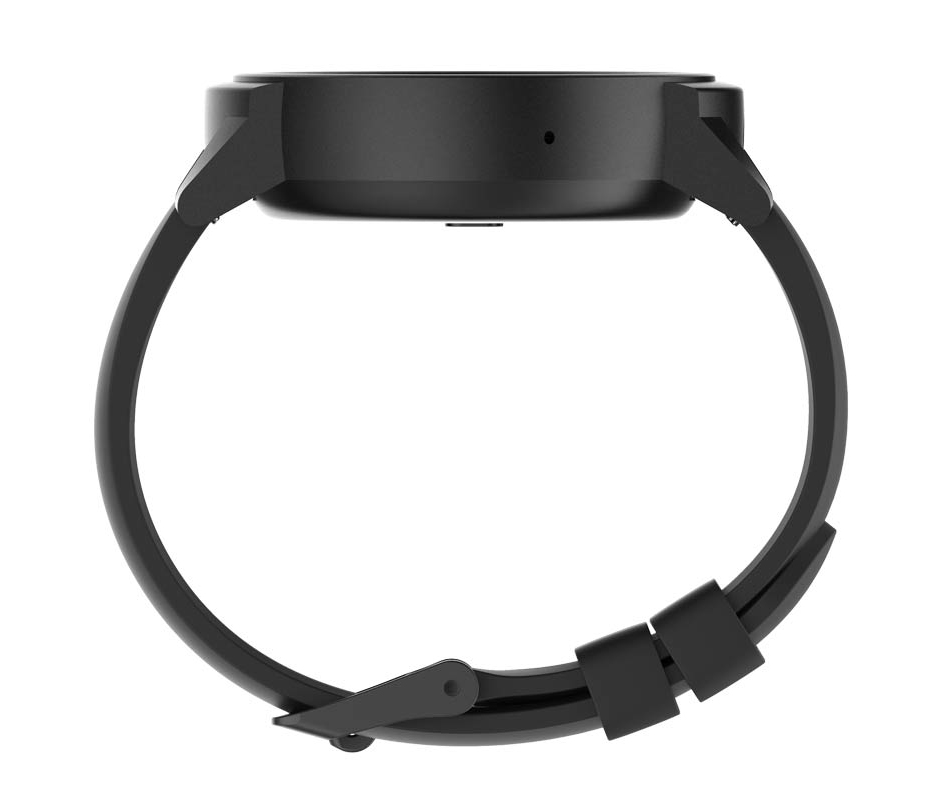 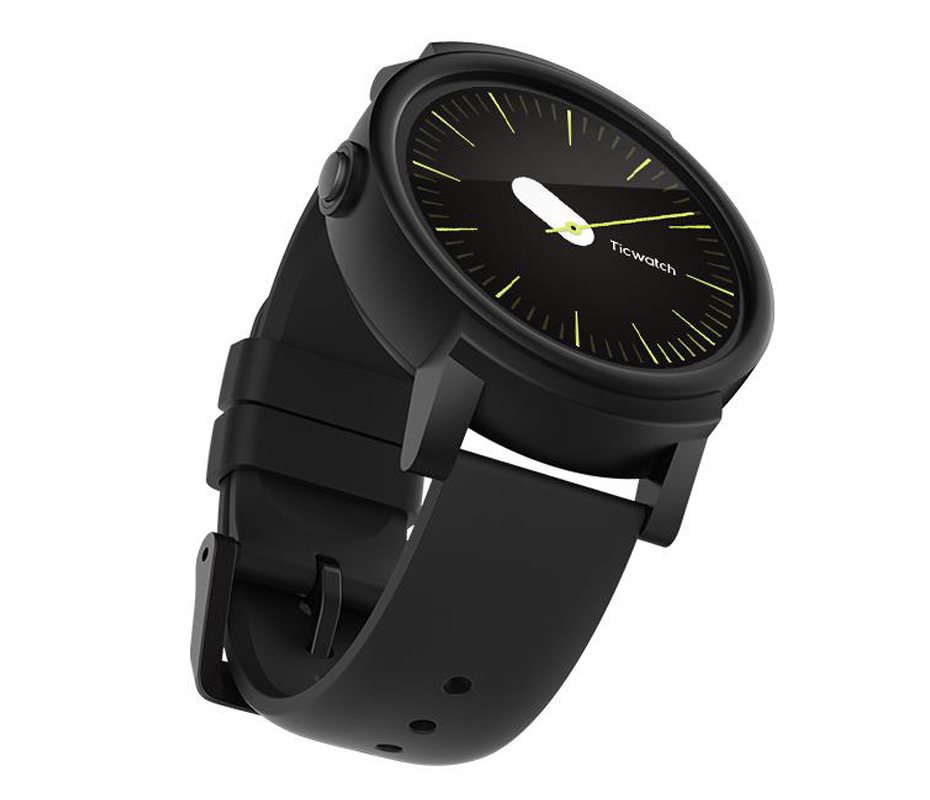 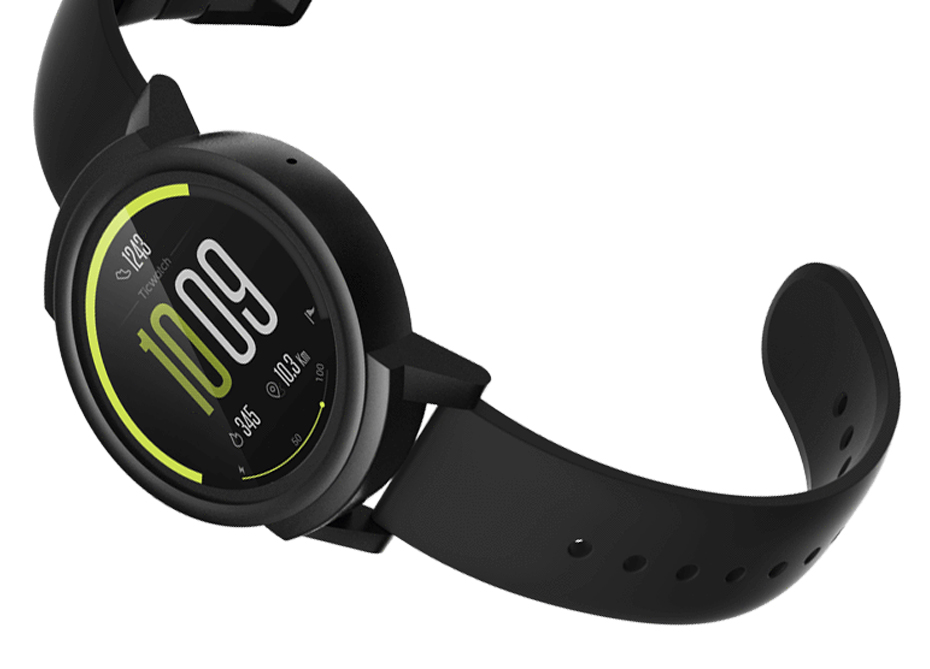 1. What languages does the watch support?
Ticwatch E can support many languages like English/German/French/Japanese/Traditional Chinese, but the system languages are English and German.
2. What kind of GPS are supported?
Glonass+GPS+Beidou, Agps supported.
3. How far away can the watch go from the phone?
10 meters in open area.The depends your cellphone Bluetooth performance and actual surroundings.
4. How long does it take to fully charge the watch?
It will be fully charged in 70 minutes by original charger.
5. Whether can I use third party charger? Why?
From the safety perspective, it is not suggested to use third-party charger.
6. Can music services on AW play over headphones connected to the watch?
After pairing with the phone, Ticwatc E can pair to Bluetooth headphones to listen music.
7. What health Activities does the Application Application Support?
Run / Walk / Cycling / Free Style etc. Any styles on third party apps.
8. Whether the watch support wechat/whatsapp/fb messenger?
Android Wear doesn’t support wechat/whatsapp/fb messenger on iOS. It supports fb messenger on Android devices, not supporting whatsapp. For wechat supporting, you need to install wechat app on your phone firstly.
9. Does it support third party music apps?
It supports major music apps,like Google music and Spotify, etc.
10. Does it support third party fitness apps?Can I share my fitness data to these apps?
It supports major fitness apps,such as Google fit, Strava, Runkeeper.
11. Does the watch have google map? Can I use it for navigation?
Yes, of course. It support google maps and other map apps.
12. Does the watch support offline music play? Can I download songs on the watch? In what format?
You can download music through third party apps. And the watch will play Mp3 and AAC format music with Compatible Wireless headset connected.
13. Can I check photos/emails/videos on the watch?
You can check emails/pictures and videos on the watch through third party apps.
14. Does the watch support to make phone call and pick up phone call?
Android phone can pick up and make phone calls.iOS doesn’t support.
15. Does it support keyboard?
Android Wear supports handwriting and keyboard for Android phone.
16. Can I reply text message via voice commend?
Do not support iMessages, but AW 2.0 standalone store empowers many messaging apps(Facebook Messager, Whatsapp, Telegrams,etc) You can barely miss a message from your phone.
17. Can I control music play through the watch?
Yes, both iOS and Android can control music through the watch.

We are proud to offer international shipping services that currently operate in over 200 countries and islands world wide. Nothing means more to us than bringing our customers great value and service. We will continue to grow to meet the needs of all our customers, delivering a service beyond all expectation anywhere in the world.

How do you ship packages?

Packages shipped from our Singapore warehouse are shipped through DHL. Packages from our warehouse in China will be shipped by ePacket or EMS depending on the weight and size of the product.

Do you ship worldwide?

Yes. We provide free shipping to over 200 countries around the world. However, there are some locations we are unable to ship to. If you happen to be located in one of those countries we will contact you.

We are not responsible for any custom fees once the items have shipped. By purchasing our products, you consent that one or more packages may be shipped to you and may get custom fees when they arrive to your country.

How long does shipping take?

Shipping time varies by location. These are our estimates:
*This doesn’t include our 2-5 day processing time.

Do you provide tracking information?

Yes, you will receive an email once your order ships that contains your tracking information. If you haven’t received tracking info within 5 days, please contact us.

My tracking says “no information available at the moment”.

Will my items be sent in one package?

For logistical reasons, items in the same purchase will sometimes be sent in separate packages, even if you've specified combined shipping.

If you have any other questions, please contact us and we will do our best to help you out.

All orders can be cancelled until they are shipped. If your order has been paid and you need to make a change or cancel an order, you must contact us within 12 hours. Once the packaging and shipping process has started, it can no longer be cancelled.

Your satisfaction is our #1 priority. Therefore, if you’d like a refund you can request one no matter the reason.

If you did not receive the product within the guaranteed time( 45 days not including 2-5 day processing) you can request a refund or a reshipment.

If you received the wrong item you can request a refund or a reshipment.

If you do not want the product you’ve received you may request a refund but you must return the item at your expense and the item must be unused.

*You can submit refund requests within 15 days after the guaranteed period for delivery (45 days) has expired. You can do it by sending a message on Contact Us page

If you are approved for a refund, then your refund will be processed, and a credit will automatically be applied to your credit card or original method of payment, within 14 days.

If for any reason you would like to exchange your product, perhaps for a different size in clothing. You must contact us first and we will guide you through the steps.

Please do not send your purchase back to us unless we authorise you to do so. 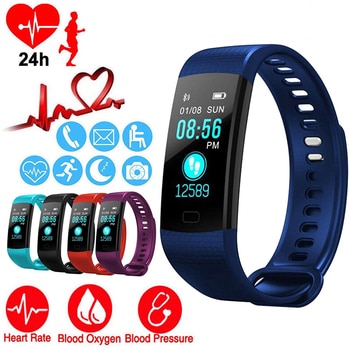 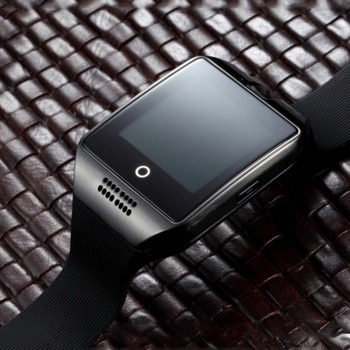 Use "Ichiban2018" for 10% off!
Sign up to get the latest deals and coupons from us!
Your information will *never* be shared or sold to a 3rd party.